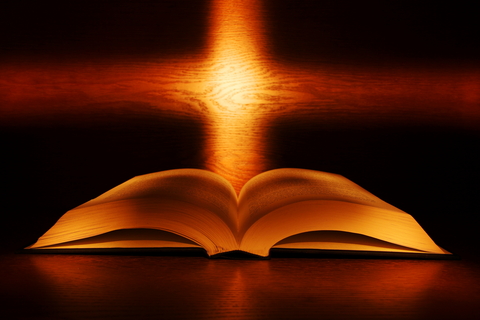 All through the history of the Church, from its earliest days, we find theologians – people who think about God, who study in order to understand God better. One of the things that theologians try to understand is, what was God up to when Jesus died just outside Jerusalem. How we ought to understand Jesus’ death on a Roman cross. What it meant to his friends then, and what it means for the world, and for us.
It’s worth thinking about.
At first, of course, after the resurrection, Jesus’ friends used every sort of metaphor, illustration, story and word picture – things already familiar with their hearers to try to express – NOT explain – this great mystery. They used words like: sacrifice, victory, atonement, ransom. “You were bought with a price,” says Paul, for example, reminding believers of the slave market. It was picture piled on picture – better than anyone’s thousand words!
Later, over the next hundreds of years, perhaps as the power of the original images faded, the expressions of joy and wonder turned into explanations – which themselves became more and more complicated.
They developed a neat “ransom theory” that put God in the position of having to “pay” Satan to set us free form captivity to sin.
Then, others decided it was God who was owed something. He was a “just God” who demanded punishment for our sin. This next thought became the “Penal Substitutionary” theory, in which Jesus came to be the substitute for the human race – the one who was punished in our place – who died to satisfy the justice of God.
Later, Christians didn’t much like that either. So they said Jesus lived, and was murdered for the way he lived – so he died to show us how to give up our lives for others, to acknowledge Him as “the way,” – the only way to freedom and peace. After all, the first Christians were called the “Followers of the Way.”
Other theories and thoughts are out there, too. Theologians still wrestle with this question. They still argue with each other!
Of course, for plenty of people, the cross no longer means much of anything at all. For some, it is not much more than a guaranteed money-making design for popular, but essentially meaningless jewelry, to hang around their customers’ necks.
Now I am convinced that the cross actually did something—something that changed the course of human events, and which altered the functioning of the cosmos. Somehow, as we have often said before, quoting one of JRR Tolkien’s hobbits, “Everything sad is coming untrue!”
In our bones we know it is true – but nobody knows how.
Neither Jesus, nor his early followers, limit themselves to just one way of talking about the cross – or how it rescues us, saves us.
Jesus talks about salvation in terms of loving your neighbor, loving God, believing in God, caring for the poor and hungry, being wary of riches, eating his flesh and drinking his blood, following him to your own cross.
But still, the authors of the gospels, and Paul too, make so much space for Jesus’ death – his obedient and willing life that led to a violent death.
That too, I know, deep in my bones, has to mean something big: something so big that the cosmos is wholly altered, and a whole new reality has begun to emerge.
But, I can’t explain how – which, is perhaps the point.
If it made perfect sense, if it were a necessary and strictly logical and legal event, then what would be the point of observing Good Friday?
(Which may explain why so many Christians who think it IS a necessary and logical and legal event, don’t -)
Where would be the wonder – the amazement – the strange silence? We recognize it to be rich and pregnant with – something?
What would be the point of falling on our knees before the cross?
If it were simple—like a mathematical formula—like any of the medieval theories of the atonement, then we could just do the math and go on with our lives.
But, for us, Good Friday isn’t a day to revel in an equation.
Sinful, Guilty Me + Jesus’ Death = Everything is OK
It isn’t like that.
It’s beyond us. It’s a song sung in a key we can’t really hear.
We are better off to do as Paul did – to pile verbal and visual image upon image.
To simply sing the poets’ hymns: “fall on our knees” or “on our faces.”
But we had better not try to explain it at all.
This is one day when we are better to be foolish – not to try too hard to be wise enough to explain it all neatly away. Love doesn’t lend itself to that kind of logic.
Wise men who try to legislate, define, calculate, explain, and tighten doctrinal screws are the ones who finally sound foolish before such amazing Love.
Good Friday is the day when we enter into the reality that Jesus—our friend, teacher, and Lord—was betrayed, denied, arrested, spat on, laughed at, whipped, and nailed to a cross. He was left to die in the heat of the day—naked and practically alone.
When in my imagination, I see his bloody and broken corpse unstuck from the cross, hastily prepared and shut up in a tomb…well, no theory on the atonement makes that go down easy.
So let it really be hard.

Christ Jesus, lover and friend, the one you call the Way, the Truth and the Life has died: For the world, and for you.

Be still and let that sink in.

Let it be beyond logic, beyond argument.