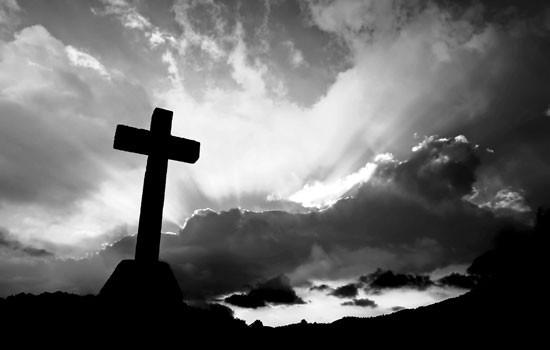 We call this “Good Friday,” and it is.
Some people name it, “Black Friday,” and I suppose that works, too.
If you remember it as “black,” you think of darkness, of the cruel injustice done to our Lord Jesus at His crucifixion. That is all that many people know of it. If you saw the movie, The Passion, the whole focus was this – on the agony and suffering of the Lord, the death-struggle of Jesus.
It you dare to claim that it is “good,” you recall, with what mercy, God went to this terrible length to save us.
Both are true. But they are not true enough. Neither is adequate to this.
Irrepressible glory already bursts through Jesus’ dying. It shines through IN his dying, not only afterwards.
Good Friday is that tightly bound up with Easter. It is all victory, and the victory begins here.
There is no separation in the mind of Paul, or of the gospel writers. This is one event. One great, new Passover. The three days intertwine and cannot be separated, so that already, at least under our breath, we are singing the Easter “Alleluias!”
And even on Easter, the Day of the Resurrection, we will still stand to proclaim the saving death of the Lord Jesus, and not his rising alone.
But what is it that we proclaim today? How do we understand the cross?
Wooden literalism will not help us here, even when it tells the truth.
Nor will theological logic alone suffice.
Too much emotion only confuses the message.
The terrible joy of this mystery is too great for reason and too fierce for sentimentality.
It means everything you have hoped, and everything you have not yet dared to hope.
You know that it means salvation for you, the atonement for your sin.
You know that in Jesus’ obedience is a model for your own generous love and obedience to the Father.
You see in the cross the “exodus,” the “exit” from your old life – the “way out” and ALSO the “way in” to another.
You know that you hold the key to the new life it promises: you have the freedom to open the latch: to trust the sufficiency of Jesus’ death and become one of his sheep. Paradoxically, at the same time you end forever the sense of being only a number – the sheep’s ear tag means both/and more – You accept Jesus and he accepts you: You agree to become his, the servant of God forever – to allow yourself to be pierced by his “naming” of you –
It means all of that –
Now, listen to this, by the poet Romanos, writing in the 6th century, as he sings how the willing and obedient death of the Lord brought only despair to Satan:
The Devil speaks:
“Now then, Hell, mourn; and I join with you in wailing.
Let us lament as we see the tree, which we planted
changed into a Holy trunk.
Robbers, murderers, tax gatherers, harlots,
rest beneath it, and make nests in its branches
in order that they might gather the fruit of its sweetness
from the supposedly sterile wood.
For they cling to the cross as the tree of life.”

That is one image, and a wonderful one.
It is only despair for the spiritual forces of evil to see Jesus walk into death, already triumphing over sin, shame and death itself. (C.S. Lewis – Lion, Witch and the Wardrobe)
Here is yet another picture, this time, directly from the Bible.
“He disarmed the rulers and authorities and made a public example of them, triumphing over them by the cross.” (Colossians 2:15)
For Paul, as for the earliest Christian poets, the cross was nothing to be sad about; it is the place of final and glorious victory. On the cross: not at His resurrection, but in His dying, Jesus disarmed all other spiritual powers and then exposed them to public disgrace by putting them on exhibit as His captives.
Paul’s readers would remember some Roman general leading his parade of victory, with those kings he had conquered trailing behind, humiliated, for all to see. This is the picture Paul paints.
The cross upon which Jesus died is not only an instrument of shameful death that saves us from judgment and condemnation, although it is that, it is also the “chariot” Jesus rides to victory over all other powers. That image is drawn from Roman history, but it also comes from mythology where morning by morning the sun god was said to ride his golden chariot across the sky, claiming victory over darkness.
In Christian poetry of the earliest centuries, and in Christian art, Jesus was often depicted driving across the cosmos on the cross, conquering the power and darkness of sin, making even the mighty Roman sun god look dark against the brightness of his glory.
The cross was remembered as the place of triumph, not as a drama of cruel tragedy and injustice.
The cross stands alone as the center of all human history, changing everything, forever.
The cross itself blazed out as the heart, soul and center of faith.
The Resurrection celebrates God’s stamp of approval – God’s joyous, “YES!” to the stupendous, entirely unexpected, undeserved victory Jesus won for us on the cross.
The victory, the shock of sudden joy, the freedom from sin and slavery, the unimaginable reversal of the whole world’s sorrow – history begins here, where all sad things are (seen to be)coming untrue.
For those with hearts to see, it still is.