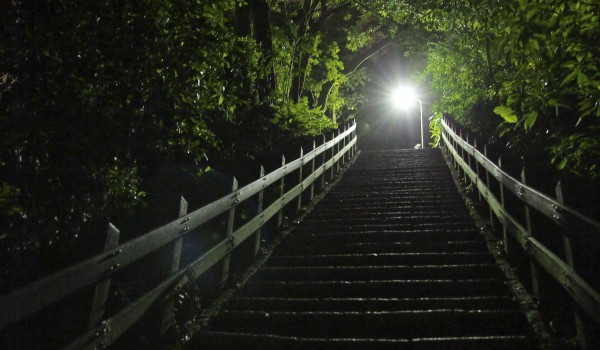 It seems an odd reference to begin this passage looking back to a fairly obscure story found in Numbers 21. In this story, the Israelites, as they were to do, are found complaining to Moses about the trials of wandering in the wilderness after having been freed from Egyptian captivity. Having been infested by venomous snakes, the Israelites cry out to God. God brings salvation from the venomous snakes by instructing Moses to create a bronze snake on a pole. All Israelites who have been bitten can be cured simply by looking at the bronze snake. While there is an element of conscious assent in this process, it is also a bodily practice. Immediately, then, one must draw a parallel between the infestation of actual venomous snakes and the global situation as it is understood in John 3. With this reference, something important has already been said of the salvation which Jesus brings into the world. The Israelites could be saved from snake venom merely by laying eyes on the bronze snake. So, too, the salvation brought by Jesus can come about through an action as simple as a glance toward Christ. The light of Christ makes such vision possible. What exactly this salvation looks like, though, is further fleshed out as the passage continues.

Early in this passage of Scripture we find a verse which is possibly the most well-known and frequently cited passage in all of Christian Scripture, John 3:16. While this verse cannot be read outside of the reality of Good Friday and Easter, it is noteworthy that neither the death nor the resurrection of Jesus is directly addressed. At its heart, the Lenten Season is about both remembrance and preparation. Yet, even in the midst of both remembrance and preparation, Lent is neither about the past nor the future. Lent is the present embodiment of both the past and the future, the point at which the events of the past and hope for the future intersect.

Returning directly to the text, we can see the importance of this Lenten present. This passage speaks of salvation as a present reality. Verse 18 proclaims that the one who believes in Jesus is now, in the present, already not condemned. Indeed, as the previous verse proclaims, Jesus is not sent to condemn the world as might have been expected of a Jewish messiah. Between verse 17 and verse 18 there occurs an important transition whereby the writer has shifted the tense from the aorist to the present. In the aorist past God ‘sent’ God’s son, but now, in the present, the effects of that sending continue to be made manifest. The past sending of the Son brings about the present institution of the church which bears his name. This church, existing in the present, is called out as a community of salvation. This present church carries on legacy of the once sent Son.

Moreover, through a three-fold repetition of the Greek word κόσμος, the gospel writer makes clear that this ecclesial salvation is in no way limited by tribe, social status, or gender. No indeed, for the salvation made manifest through the sending of Jesus, and practiced by the church, is intended for the κόσμος, for the whole world. God sent God’s son into the world precisely so that the entire world may be saved through him. While verse 16 speaks directly to the issue of individual belief, beginning with verse 17, and moving through the rest of this passage, the notion of the individual believer becomes less significant. Beginning in verse 17, it is the world itself which is in need of salvation. Perhaps unsurprisingly, John uses the term κόσμος many times throughout this gospel. As with any act of translation, there are a number of ways that κόσμος can be brought into the English language. Two of the most common translations found in this gospel seem to be (A) The inhabitants of the world which, altogether, seem to form a sort of unity, or (B) the physical world itself. This second translation in no way excludes the human portion of creation, but neither does it look at humanity apart from the rest of creation. It is particularly this translation of the Greek which would be most enlightening for this passage.

When κόσμος is translated as more than just humanity, one gains a much grander understanding of the salvation that John seeks after. Indeed, when it is understood that God seeks to bring salvation to all of creation, the entirety of the cosmos, one sees in this passage a much greater ethical imperative than one might otherwise. Whereas John 3:16 is often plastered on billboards and held up at sporting events as a means of reaching individuals, i.e. God loves you and wants for you to be saved if you would only believe, the rest of this passage makes it clear that God’s salvation is not only efficacious in individual eternal life. Rather, one sees that the salvation of all creation demands ethical action through belief. Belief, of course, is not in and of itself already an ethically effective action. Rather, proclaiming belief in Christ compels the believer to live in the world according to the demonstration of Christ’s life.

That belief compels ethical living is demonstrated by the continued use of the present tense in verses 18-21. The past action of the incarnation, demonstrated by verses 16-17, continues to have important ramifications in the present. Judgment is not relegated to a mysterious and seemingly endless future, but rather plays out in the present. According to verse 21, the one who believes is already not condemned. The one who believes comes to God’s light “so that it may be clearly seen that their deeds have been done in God.” Here, the bridge is made between belief and deed, between believing and acting. The proclamation of Christian belief compels Christ-like action. Yet, in the Lenten present, the church is reminded that the Christian life is not as simple as first believing and then acting accordingly.
Traditionally, the Season of Lent was set aside as a time of preparation for those who were to be baptized. Lent serves as a time of penitence, evaluation, and humility. In Lent, at least as traditionally conceived, there is an interesting interplay between belief and action. The unbaptized believer exists at a juncture in which neither Christian belief nor Christian action is fully developed. The intention of the Lenten Season is to train the new believer in both belief and practice. Here is a hermeneutical circle in which action influences belief just as strongly as belief influences action. The practicing of liturgy, participation in the sacraments, and the life of the church all exist as actions from which beliefs are defined.

The Lenten Season, as currently practiced by the church, is therefore not only for new believers. Lent is a time in which the church is reminded of both darkness and light, of both dread and hope. The church exists in a Lenten present in which darkness thrives. One’s passing through of the darkness of Good Friday is a present reality even after the light of Easter. Lent, therefore, is not merely a season of belief or unbelief, but a season of profound action. Lent is a prayerful season in which the church humbly asks that both her thoughts and actions be tested against the light of God. Only by practicing such prayers of discernment can the church fully participate in God’s salvific activity. God’s son was sent to earth not only that individuals might be saved, but that the redemption of the world will be enacted through the church as well. This is John’s reminder in this passage: believers are to celebrate their own salvation by further enacting the redemption of the world. The incarnation of the Son is continued in the work of the church. The church, surrounded by darkness, has been charged to act as light. This is the salvation wrought by the incarnation: God sent God’s Son in order that the world might be saved through him. The responsibility of the church is not simply to repent for the love of the darkness, but, in loving the light, to continue Christ’s redeeming work, that darkness will be overcome and the world itself might be saved.